Tactical flashlights are known to use high lumen LEDs to blind an attacker temporarily. In addition, they serve as a good self-defense tool, especially in the dark.

Tactical flashlights are allowed on airplanes as stated and certified by TSA on their website only when the TSA official on the ground permits it.

However, the TSA website allows flashlights fewer than 7 inches long without sharp edges.

Moreso, tactical flashlights allow you the needed moments to overpower an attacker by temporarily blinding them.

Also, the beveled striking surface on the head of your tactical flashlight lets you strike the assailant as you make your escape quickly.

Still, TSA reserves the right to pull any item that appears harmful, especially if your flashlight’s crown has rough edges that make it appear like a weapon. It could be confiscated. 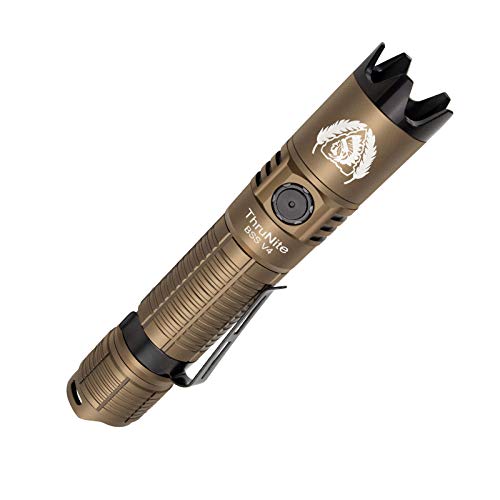 Knowing in advance what items need to be checked and what can be transported before arriving at the airport can save you a lot of time.

In addition, packing your carry-on bag correctly speeds up the screening process and reduces the risk of setting off an alarm.

When packing your carry-on, keep in mind that if your bag or items in the bag trigger an alarm, you and your bag will be subjected to additional screening.

Even if the items are usually allowed in carry-on luggage, there is no guarantee that they will always be allowed.

Items that trigger alarms, pose a security issue, or appear to have been tampered with can be confiscated from you during the screening process.

Can a Flashlight be considered a Weapon?

There are lists of high-lumen tactical flashlights for self-defense.

These flashlights are considered a weapon because they come with a rough and rugged edge that can be used to strike an attacker.

Weapons are one of those items on the TSA limited list for flights. This is why they must be checked in check-in and sometimes indicated.

Concerning flashlights, as you all know, some flashlights can be used for self-defense, so wouldn’t they be a weapon?

Bold bezels are the perfect example of how a flashlight can be used as a weapon.

Can You Take a Flashlight on an Airplane?

While some flashlights can be used as weapons, not all of them need to be checked. If the flashlight is longer than 7 inches when fully assembled with hard prongs, it should be checked at the airport and confiscated by the proper authorities.

If they are less than 7 inches long, measured end to end, they are allowed in your carry-on by the TSA.

Sometimes your larger flashlight looks impressive or emits a larger beam when needed, but some have jagged edges that can be used to break glass or ward off an attacker.

If you think airline security will consider this more of a weapon, leave it at home. The best thing is what you normally carry in your pocket every day.

As a simple tip, if you must carry a tactical flashlight on board an airplane, take a well-known brand. Chances are, TSA officials will spend more time checking an unknown product than the known ones.

Other self-defense devices are not allowed in airplanes