One of the most common problems we hear about homeowners is a beeping smoke alarm, usually 3 times. This can be a very alarming situation.

After working for a length of time, in some cases up to 6 months or 1 year for the replaceable kind, smoke sensors are designed to generate a beeping sound at regular intervals to alert the user that the batteries need to be replaced or recharged. 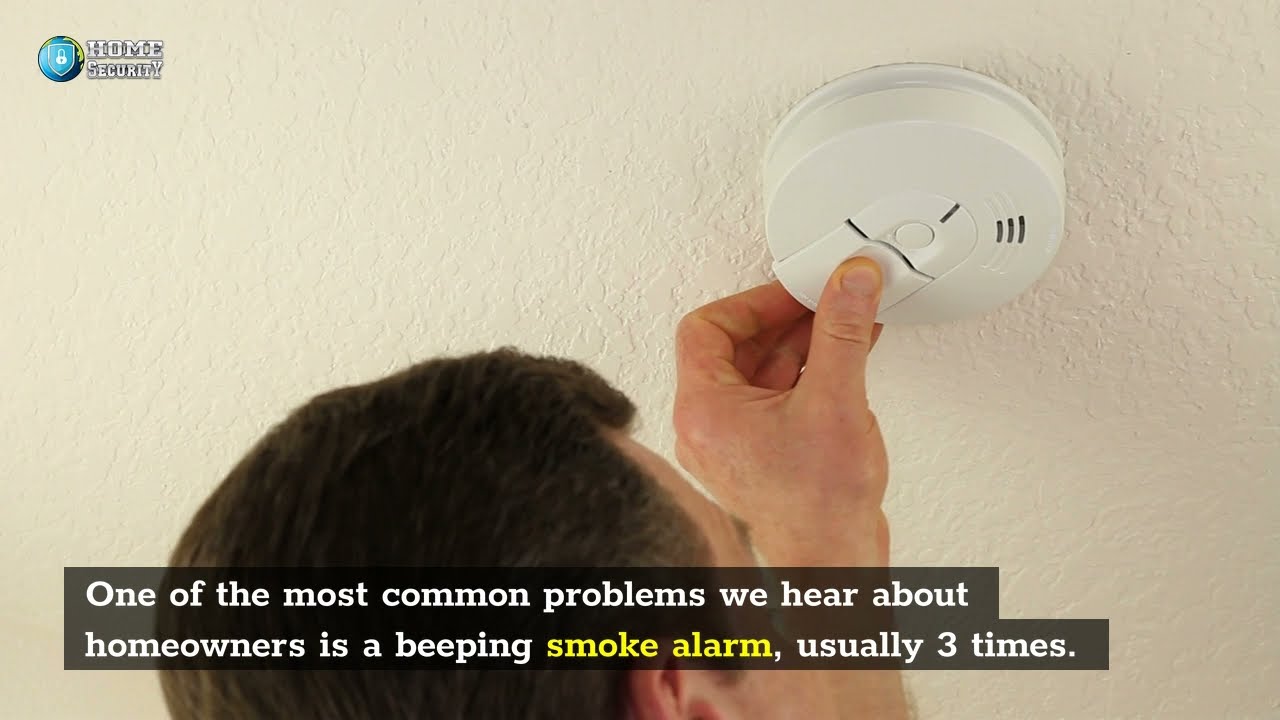 The short answer is that it is a low battery indicator.

Every smoke alarm works on a simple principle, and the beeping you hear happens for a reason. Smoke detectors are designed to detect even the smallest amounts of smoke, so they constantly send out a faint alarm to make sure they are working.

Then, after a while, the alarm will stop.

If the alarm goes off, check the battery and replace it if necessary. If not, the detector may need to be replaced.

The number of beeps a smoke detector gives out indicates how difficult the situation is.

Unfortunately, the industry makes these devices like this, so they keep beeping until the battery is replaced.

Smoke alarms will beep for a second and stop or beep continuously in a pattern of three beeps and a pause; both sounds mean something completely different.

The following are some possible causes of your smoke detector beeping 3.

Why does your smoke alarm keep beeping when there’s no fire?

When a smoke detector need has a problem (unspecified which one exactly), it will have a pattern of three beeps.

The following are some possible explanations:

Having known some of the reasons while your smoke detectors make those annoying sounds, we should look at “how to stop your smoke alarm from beeping.” But before then, you’ll need to find out what kind of smoke detector you have.

Several types are available, like Kidde smoke alarms (the most popular for home security).

However, most modern smoke alarms are battery-operated or connect to your home’s electrical wiring and include a backup battery.

In addition, a beeping smoke alarm is a warning of a malfunction, not an alarm in and of itself. Consider these reasons in greater detail below.

Why your smoke detectors may be beeping

It’s time to get a new battery

The smoke detector battery must always be fully charged for your safety. For this reason, detectors are designed to signal when the battery is getting low clearly.

They will not leave you alone until the battery is replaced.

Here are the 2 top listed batteries on Amazon’s user reviews:

Why does my smoke alarm beep even after I changed the battery?

The battery door is not closed, /  the battery pull tab is still on

Pull tabs keep the battery charged until it’s time to put it into a gadget.

This causes the detector to believe there is no battery or that is it is very weak, resulting in an alarm to notify you about this.

Another cause could be that the poles cannot contact because the battery door is not correctly or fully closed, resulting in an alarm to notify you about this. So if the plastic tab is still in place, check it and pull it out.

The battery has been installed incorrectly.

It can be difficult to tell how the batteries should be placed in the smoke detector while replacing them while you are hanging upside down.

So take down the smoke alarm and replace the batteries when putting them on the table, not while you’re standing on a ladder.

Normally your smoke alarm should run on 9V batteries, or if you have an older or very cheap model on AA batteries.

The smoke detector is broken or out of date.

It is normal for a smoke alarm to emit a beeping sound when it is broken or malfunctioning, which signals that the alarm needs to be replaced.

Did you know every smoke alarm has an expiration date? This again is an industry standard.

The expiration date of the smoke detector can be significant. The average lifespan of a smoke detector is 8 to 10 years, depending on the model, yet this should be taken with a grain of salt.

Therefore, when the device is first installed, it should have a stamp stating when it is expected to expire. Officially, if that date is nearing or has already passed, your smoke alarms may be blaring or chirping as a result of this.

But often, it will fail before that date.

Previous error codes are not gone.

Once the battery has been replaced or the problem has been resolved, certain smoke alarms will not automatically delete error codes.

If this is the case, the internal processor will continue to generate a weak beep until the code that caused it to beep is removed.

You can clear the error code and switch off your smoke alarm on your own by pressing the test button on the device for roughly 10 seconds while it is turned on (there should be a button on it that says “TEST”).

The smoke detector (and connected equipment) will reset in about 10 seconds, and the beeping will stop.

Dust or steam can cause false alarms.

Dust settles in smoke detectors just like it does anywhere else, and if enough dust accumulates, it can be misinterpreted as smoke and, again: cause the sensor to beep.

Also quite common is that smoke detectors installed near bathrooms may sound an alarm when someone takes a long steamy shower because the steam can also be misinterpreted as smoke by a detector.

Many smoke detectors also include heat sensors: when the temperature abruptly rises, or steam or heat from boiling enters the device, and an alarm may sound.

As soon as you set your thermostat to an unusually high or low temperature, your smoke alarm may try to be smart, and there goes the alarm.

Likewise, the same goes for very warm air coming from the bathroom or kitchen. Like when you open the bathroom immediately after taking a hot shower, for example.

If this is the case and it’s frequently happening, you might consider moving your detectors to spots where temperature variations do not as easily influence them.

There is a fire in another room of the home.

If you have wired smoke detectors throughout your home, they are normally interconnected, which means that if one goes off, all other smoke detectors will beep along, this to inform the people that there is a fire somewhere inside the house.

You may not notice that a fire is burning until it is too late.

So while it’s natural to stroll around the house looking for a fire, but remember that you can open a door or walk into a room that’s on fire and might not be able to get out.

I would proceed with caution or exit the house and call the fire department if it were me.

Your smoke alarms’ primary function is to protect you and your family from harm. So, if your smoke alarms start blaring incessantly, it’s time to look into the problem to guarantee that your home is safe from fire and other threats.

As previously said, there are a variety of reasons why your smoke alarm may sound, and you must identify the source of the beeping before disconnecting the alarm and stopping the beeping.

However, you can use these simple tips to prevent your smoke detectors from ringing three times:

How to stop the smoke alarm from beeping

The methods for stopping a wired or battery-powered smoke alarm from sounding three times in a row are listed below.

Smoke alarms, whether battery-powered or wired, can beep for various reasons, and you can usually silence them in the same way.

Hardwired smoke alarms usually beep if the alarm is outdated (expired), the battery is low, or there is dust in the device, causing detecting issues.

1. How do I prevent a wired smoke alarm from beeping?

If your smoke alarm continues to beep after the battery has been removed, it is a hardwired smoke alarm still receiving electricity from the electrical cables.

2. How do I silence a smoke alarm powered by batteries?

Smoke alarms powered by a battery can be muted by simply removing the battery.

Warning: do avoid leaving the unit without a battery for an extended period of time. Otherwise, your residence will be unprotected, of course.

Another option is to silence them using the same techniques as hardwired smoke alarms.

Also, keep in mind devices older than 10 years old should always be replaced.

Wrapping up: Why Is My Smoke Detector Beeping three Times?

To know how to behave responsibly when your smoke alarm beeps, you must first grasp what it signifies. If your detector beeps every few minutes, for example, the noise is most likely caused by a low battery.

So be smart and be worry-free and invest in a quality battery so you can forget about it.

However, as we explained above, when dust, dirt, or steam enters the device, your smoke alarms may emit the same beeping sequence. The placement is important—the age of the device.

Lastly: carbon monoxide detectors that beep four times in a row pause for a second and then sound four times more repeatedly usually indicate the presence of carbon monoxide, which can also be because of poisonous gas.

When your carbon monoxide alarms go off, you must leave immediately and call the fire department to have a CO test done.