I was watching TV one night and happened to see a commercial for AREBI spy cameras. I had never heard of them before and became interested.

After doing some research, I discovered that these spy cameras don’t look like the typical cameras you would expect for a security camera system. But they get the job done.

The AREBI spy camera is a fantastic spy camera that you simply must-have in your collection. It is compact and has an excellent picture.

In addition, the AREBI spy camera performs admirably, and the high-definition videos it is capable of recording are obvious.

As homeowners and business owners, you will agree that we are interested in knowing what is going on with our properties and how they are used.

However, sadly, unexpected occurrences or situations can occur while we are away, resulting in financial or emotional damage for us.

We have all seen and heard accounts on the news about some heinous babysitters who abuse children when grownups are not there. Furthermore, we’ve witnessed employees of certain companies steal money from their employers regularly.

Although there are no guarantees against such accidents, there are some measures that homes or business owners can take to minimize their risk.

Investing in a video surveillance system is an excellent approach to address these issues. If you can afford it, it’s a good idea to invest in a security camera with easily hidden features.

Let’s have a look at a camera that is compact and unobtrusive in its design. Check out this hidden little spy camera like the AREBI Spy Camera, which is small and discreet.

Please take a look at some of the background information on AREBI before getting into the specifics of this camera’s functions.

AREBI appears to be a newcomer to the video surveillance business, and as a result, there is little information available about the organization. 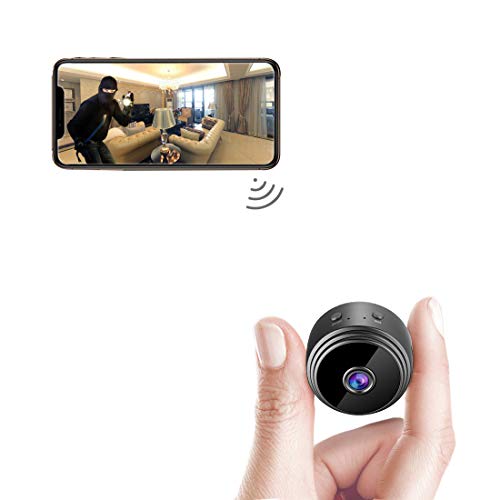 AREBI specializes in making video surveillance equipment, and their main focus is making discreet cameras and can be easily placed out of direct view.

The AREBI WiFi Hidden Camera is intended to improve the overall security of your house.

For security purposes, each device has a unique hotspot (UID – Unit’s Identity) that can only be accessed by you and no one else without your consent.

However, despite its modest size, the concealed camera is equipped with all the helpful capabilities you expect from a WiFi camera.

By launching the APP and connecting to the room’s 2.4GHz router through WiFi, you will be able to watch live video or replays from anywhere in the world.

When connected to a USB charger, this security camera is ideal for use as a housekeeper or nanny camera, allowing you to monitor your home or business around the clock.

I appreciate the AREBI Spy Camera A10 Plus Facility for several reasons.

The AREBI Spy Camera is simple to set up and operate. It includes a magnetic back, which allows users to connect it to metal surfaces without damaging them. However, the camera must be recharged after 1 hour of operation.

Thus users who want to adhere it to a non-metal surface should use some tape and make sure there is a power outlet nearby.

This camera has a plethora of beneficial functions. First, because the AREBI Spy Camera is small, it may be readily hidden in a spot not apparent to the naked eye.

Although AREBI does not specify the actual dimensions of the camera, it appears to be roughly the size of a half-dollar coin based on the images posted on their website.

This camera has a broad viewing angle of 150 degrees and can record video in 1080p high definition. In addition, users of AREBI can zoom in up to six times, providing more detailed images.

The battery of the AREBI Spy Camera is rechargeable, and the camera may continue to record video even while it is charging.

In addition, because the camera is battery-operated, several users also use it to watch and protect their vehicles, which is a convenient feature.

The AREBI Spy Camera is equipped with clever motion detectors whose sensitivity may be customized.

Additionally, the camera is equipped with six infrared light-emitting diodes, which allow the user to see images up to five meters away in complete darkness.

The videos captured by the AREBI spy camera can be accessed in a variety of ways. In order to view the live video, you must first download the free AREBI app and then log into the app.

A Micro SD card, which must be purchased separately, can also save the videos on the camera.

When the AREBI spy camera senses movement, its motion sensors begin recording and sending notifications to the user’s smartphone. Although live video streaming is free, there is no payment for accessing the recorded videos, which AREBI provides.

The manufacturer says the recorded videos can be retrieved through a micro SD card or kept on a phone or laptop computer.

The AREBI app, available for free download and compatible with iOS and Android smartphones, may be found here. Users will be able to remotely turn on and off the camera by using the app. You can also watch videos in real-time while on the move.

A push notification is sent to the user’s phone to inform them that the camera has detected a motion when a motion alert is triggered.

It is possible to configure push notifications to work with timers so that app users only receive notifications for the period of time they have set aside for their camera.

How to set up AREBI Spy Camera

This AREBI Spy Camera Unboxing video is to get the full details on installing and using the spy camera.

We took a look at the AREBI Spy Camera A10 Plus Review, which is one of the tiniest cameras available on the market today.

Like Wyze’s indoor cameras, this camera is intended for people who want a small, discrete security camera that does not take up a lot of room and is difficult to detect from a distance.

The size of this camera, in our opinion, is what distinguishes it from the competition. This spy camera is one of a kind since it is so enormous, yet it has so many functions even though it is so compact.

Anyone interested in purchasing this camera should do so on the internet.