Yes, some Eufy security cameras can detect animals, or rather pets, provided they have the Eufy AI chip built-in and are located within the viewing area. This is enabled due to the camera’s passive infrared (PIR) sensors, which use heat signatures to detect motion and recognize the object and types of motion.

Perhaps you don’t want to monitor your pet but want to guard your premises against stray dogs, cats, birds, or other animals that can cause trouble around your house?

Then you have to disable Detection Type of “Human only” in the camera’s settings in the Eufy app and fiddle with the Detection Sensitivity settings. So it depends on your intention of detecting or monitoring animals: Animal Detection is not the same as Pet Detection.

Which Eufy Camera’s have Pet Detection?

Some of Eufycams come with a dedicated AI chip (artificial intelligence) inside, designed to recognize the animals and pets that appear in its feed.

However, it is worth noting that animal detection and pet detection are different things.

Unlike Human Detection which is available on all of Eufy’s security cameras (processed either via the AI chip or via HomeBase 2), four of their regular surveillance cameras come with actual pet detection and recognition, too, they are :

This is EufyCams current surveillance camera lineup that has “Pet Detection.”

On top of that, Eufy also created a dedicated camera for pets, the “Pet Dog Camera,” named the D605. More about this wonderful dog lover gadget is below.

Eufy is also working on plenty of other smart features like Crying detection, Facial detection, and Facial recognition, which will further strengthen the security they provide. 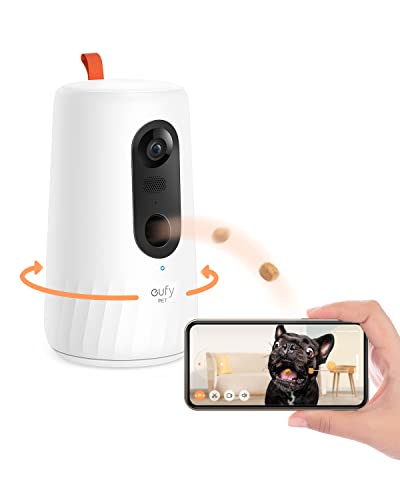 The D605 helps you easily monitor and have fun with your pet while adding interactive features. They call it a dog camera, but it works just as well on cats.

This smart camera comes with night vision thanks to 4 infrared sensors and supports 1080p video quality and 2.5 zoom capability. The 170-degree wide-angle lens gives you a good view of the room you place it in.

This camera can be mounted on any flat surface and looks quite fun with the orange embellishments.

Have a look at some of its best features :

– AI motion tracking finds your dog or cat when you want to see them. The rotation is done manually via the app or automatic motion sensor tracking. The AI also enables the camera to rotate, helping you track your dog’s movements easily and notifying you. Eufy calls it “The Smart Dog Sitter.”

– Pre-record commands: You can record commands in advance that the camera will play automatically when it detects your pet entering the activity zone.

– Woof Detection: as the name suggests, this feature notifies the owner when their dog is barking too much. Then, you can easily comfort your dog by talking through the in-built speaker placed within the camera itself. So again, it’s good for the dog and your relationship with your neighbors.

– Pet Sick Detection: if your dog is sick, poops, vomits, and licks its paws, Eufy’s Smart AI will notify you.

– Treats Tosser: The Eufy Cam also features a treat compartment and outlet that allows you to toss treats to your pet whenever you want.

With the 270-wide angle rotation and the ability to throw treats at 3 different distances, you can throw treats up close and from a distance like a slingshot.

The more you wipe back, the stronger the start. A preset sound or recorded command will be heard to call your dog to you before the treat is thrown.

You can have a lot of fun, making playing with your dog very interactive when you are in the office or out and about. This tray also has an infrared threat detection system that notifies you when the treats are running low.

– Daily Doggy Diary: This feature makes a 1-minute video from snippets from the footage recorded throughout the day and combines it into one coherent video with joyful music, which you can share with friends and family, it even 16GB storage space built-in, in typical Eufy style: storage is subscription-free. If your dog or cat comes very close and looks in the camera, it’s called Selfie.

– Talk to your dog at any time: you can feel (less) guilty when you leave the house because you can always see your dog and talk to him, check on him and calm him down if necessary. Owners who are often away from their dogs will love this device.

Eufy is integrating “Pet Detection” into several of its regular security cameras, the Solo IndoorCams and the Solo OutdoorCams, and has developed a special pet camera that is really for anyone who loves their pet (dog or cat) and worries about their little buddy when they are away.

The regular AI chip-equipped cameras already have quite a few pets features (like motion tracking, pet detection, activity zones, and recorded pet commands) and offer this at a very affordable price.

The Eufy Pet Dog Camera goes even a step further with a treat launcher, sick pet detection, woof detection, and a daily video diary, so you can geek out on being a pet lover!

In conclusion, the Eufy Security Camera can detect animals and pets. In addition, the camera’s motion detection feature can differentiate between humans and animals, so you can be sure that your furry friend is always safe. If you’re looking for a specific reliable security camera that can also keep an eye on your pet, the Eufy Pet Dog Camera D605 is a great option.